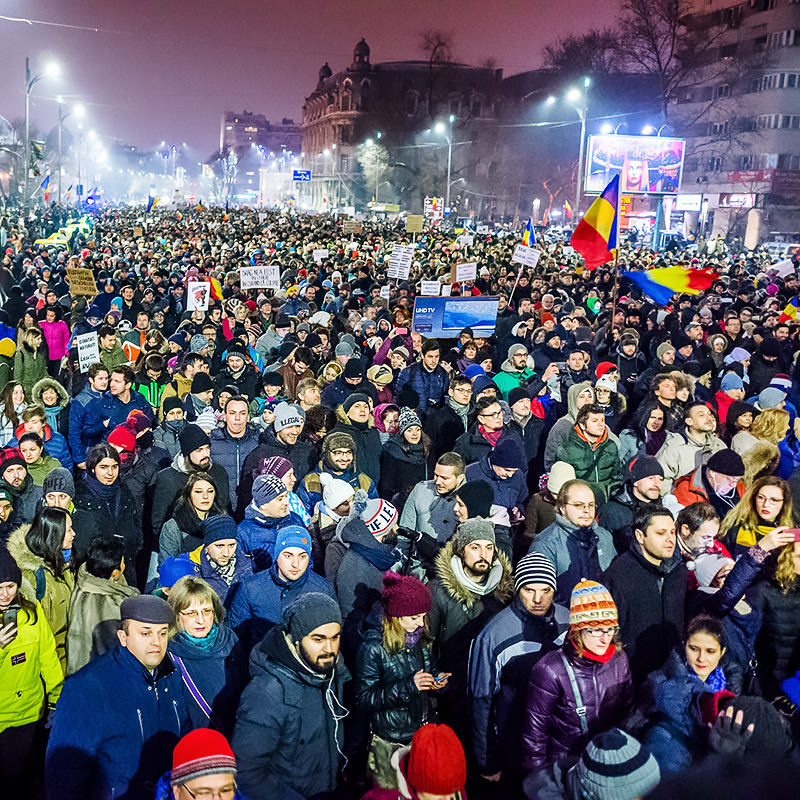 ‘Part of the change is demographic: Over the last decade, Latin America’s middle class has grown by roughly 40 million people and now outnumbers those living in poverty. The middle class wants more than jobs or survival, more than “rouba mas faz.” As taxpayers, they want honest government and are no longer willing to overlook abuses of power. With the help of another new phenomenon, the mobilizing power of social media, this rising middle class has led the anticorruption charge into the streets, not just in Lima, Bogotá and Guatemala City but also in Baghdad, Bucharest, Tel Aviv and beyond.’

Corruption costs the global economy around $1.5 trillion each year, according to The World Bank – siphoned off in bribes that line the pockets of elites instead of the public infrastructure needed to give long-term resilience to fragile economies.  As Brook Larmer writes this month in the New York Times, ‘[b]y degrading social norms and civic virtues, not to mention the rule of law on which investment depends, corruption rots the foundations of a healthy economy. The World Bank estimates that poor families in developing countries routinely spend twice as much as rich ones on bribes – extorted by gangs that mercilessly control lawless neighbourhoods. In Latin America, where corruption has long been a way of life, ‘locals….shrug their shoulders and say ‘“Rouba mas faz” — roughly, “He steals but he gets things done.’’’

But now things are shifting. From the incarceration of the South Korea’s former president Park Geun-hye to Zuma’s trial for a $2.5bn arms deal to the ‘octopus like bribery scheme’ of Brazilian construction company Odechrecht currently spanning 12 countries, a wave of demographic and technological change is toppling leaders and a status quo that has ruled for generations. But does it signal real change? The token wins of the past in this region simply  led to more of the same.

But the collision of education, aspiration and social technology in an increasingly middle class world mean this shift runs deep – driving structural  change that embody the values of transparency age, from whistleblower protections to stronger plea bargains, with a new generation of independent and vocal judges and prosecutors at the helm.

“Judges, journalists and the public now have the strength to take on high-level corruption,” says Kevin Casas-Zamora, a former vice president of Costa Rica and senior fellow at the Inter-American Dialogue. “It’s not that corruption is getting worse or better, but that societies are more willing and able to uncover it.”

As Larmer observes, these new ‘systems  of integrity’ are still in their infancy – but the change of one generation, as with so much else in our world, is dramatic. ‘Twenty-five years ago, there were no rules, no conventions, no jurisdictions against corruption,” says Delia Ferreira Rubio, chair of the global anticorruption group Transparency International. It’s the collective responsibility of governments, civil society and businesses, Ferreira Rubio says, “to ensure that impunity does not prevail.”’

The bigger implications of a more middle class world are not always so encouraging. Unlike the middle class booms of the past, created as a direct result of focused government policies – the New Deal program which lifted 20 million people to the middle in 1930’s America’s – leading research today finds  ‘little evidence to suggest that [a more middle class world] will create pressures for more democratic governance or for better delivery of public services, both of which are required for sustained growth’ (Kharas, 2017). Today’s emerging middle classes do not appear to depend on governments for success and they do not support the higher taxation to pay for it – which is useful, as most cash-strapped governments are increasingly unable to meet the soaring expectations for universal healthcare, education and pensions.

As a result, Kharas argues, ‘there is no social contract binding the middle class to democratic government’; the middle classes of the past have may toppled strongmen leaders (Brazil, Indonesia, Philippines, and Tunisia) but today they’re just as likely to clamour to restore military rule if it yields stability (Egypt and Thailand). In the developed world, where the ‘squeezed middle’ have long felt the smack of disappointment and the sting of economic stagnation, populist rhetoric continues to take on new lustre for this demographic. Add to this the rampant consumption of our growing middle on the world’s slender resources, and the picture looks less than happy.

And yet here we see the full power of transparency, youth and frustrated expectation combining to break a national chokehold and restore prosperity to millions. Long may it continue.

How to argue with a racist