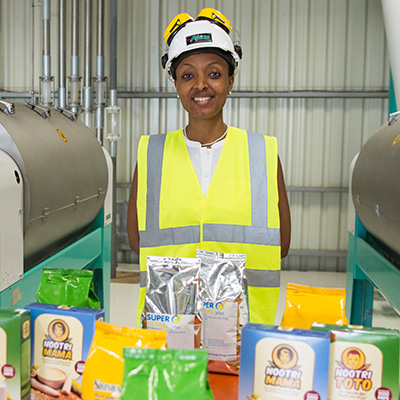 “More than 250 million people are undernourished in Africa, making them vulnerable to disease, deficiencies, and prone to developmental stunting that inhibits their full potential. The long-term economic costs of this are staggering: this must change. With the effects of climate change expected to further negatively impact global food production in the next decades, it will be vital for everyone to work together.”

There is no perhaps no better illustration for the broken system of aid than food imported from one world to another. Literal sustenance, moved at great fiscal, environmental and ultimately human cost, to feed the 820 million people and rising who still go hungry – without ever planting a truly nourishing seed. According to the OECD, in 2017 official aid to Africa totalled $29 billion.

Such has been the western approach to global malnutrition that stunts huge swathes of human potential, and remains – despite good progress on the Sustainable Development Goals – a growing challenge across sub-Saharan Africa. Zero hunger by 2030 looks to be an increasingly tall order.

Until now, it has not been in our interest to imagine better alternatives.

But as the World Economic Forum on Africa reminds us this week, this desperate issue is not as far from home as we prefer to believe. Globally, the complex interdependencies that constitute modern food supply systems are at breaking point – deemed unsustainable, by every academic study, from an environmental, nutritional and resource perspective. The reality is that most nations, Britain included, don’t have anywhere near the capability they need to feed themselves without reliance on global co-operation.

Thankfully, more imagination comes from less complacent quarters. Innovative African partnerships are tackling malnourishment from birth to adulthood – and, with successful for-profit models, a host of other issues.

Africa Improved Foods (AIF) spans sectors and the public-private divide to feed the people of Rwanda while providing countless jobs, raising food production standards nationally and generating economic growth. With an investment of $70 (partnering with CDC, DSM, the Government of Rwanda and IFC) poured into best-in-class technology, it now supplies nutritious meals to over 2 million Rwandan children, produced by local talent and sourced from 25,000 local farmers (mostly women), supported with stable income and education to improve post-harvest practices that develop the local maize value chain.

With its keen focus on the crucial first 1000 days of life that determine so much of what comes after, AIF is tackling deprivation at the root to unlock national potential. An independent study conducted by the University of Chicago estimates that between 2016 and 2031, ‘AIF will generate $756 million worth of discounted net incremental value for the people of Rwanda: $532 million of this is attributable to the projected reduction in malnutrition rates.’ In addition, ‘the study estimated a further $228m value creation for the East Africa region by improving its net forex position (producing locally what was previously imported) and by purchases of other raw materials from countries in the region (especially Uganda, DRC, and Kenya)’.

After two years of successful operations, attention is now turning to an Africa-wide roll out.