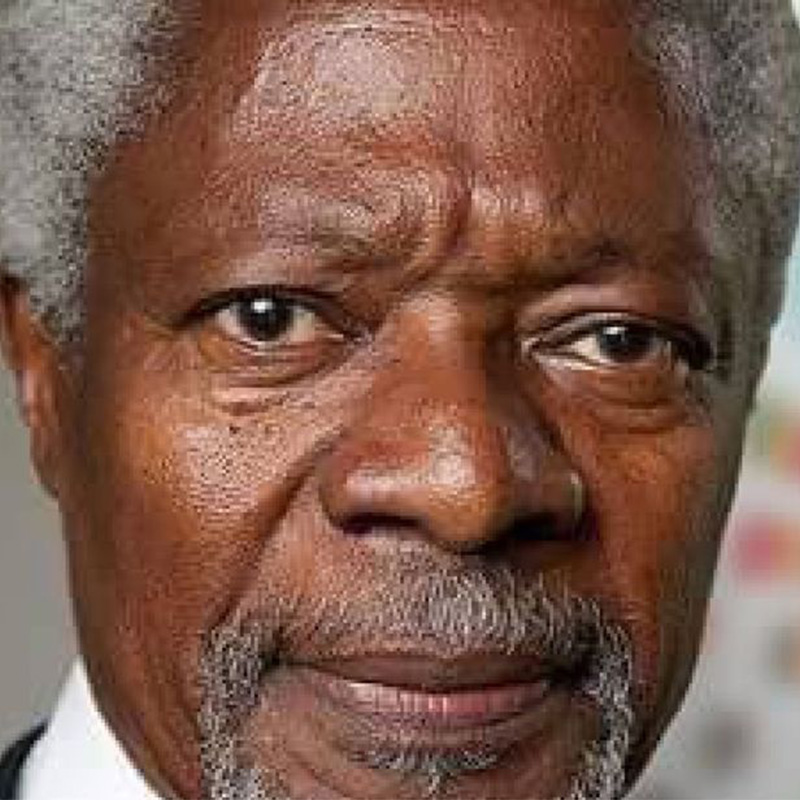 With his form of leadership, he taught grace to the world’s powerful, and gave strength to the world’s most lowly: boundless in his compassion and emphatic in his belief that you are never to young, or too marginalised, or overlooked, to lead.

His last twelve months were testament to the unmatched momentum with which he had pursued his cause: striving tirelessly, even at 80, to leave behind him a world capable of healing itself. So in demand was his wisdom – as I learned on my first meeting at his Geneva office all those years ago – that he had perfected the art of the ten-minute meeting: providing, in those fleeting moments, an answer to the even the most complex and intractable problem.

Kofi spoke and worked on everything from food security to genocide because they were, for him, innately connected: the building blocks to a peaceful, nourished, sustainable world. He saw the world as a whole, and because of this he was able to intervene at its heart.

It was in this spirit that Kofi first agreed to support 8 Miles: the fund Bob Geldof and I established to be a new private equity fund in Africa, and our attempt, through the catalytic effect of investment, to make smaller the 8 miles gap from Europe to Africa that then still seemed a world away.

When we first met Kofi and his wife Nane, it was in the rather more familiar environs of South Kensington’s Brasserie, over a Sunday Lunch that would mark the first phase of our ten-year relationship. His deep grasp of systemic change meant he immediately saw the value of 8 Miles, and the statement it would make about business.

Kofi’s ability to a get a sense of balance between things – to grasp the true nature and import of equilibrium between states, powers, individuals – is the backbone of his legacy, and the quality of which our world is in most short supply. His was a deep yet practical humanism: enabling dictators to step down quietly, without bloodshed, saving countless lives; giving coherence to a framework of nation-building that provides the only true route to sustainable progress for humanity. As Alan Dos, president of the Kofi Annan Foundation reminds us: ‘There can be no peace without inclusive development and there can be no lasting development without peace. And no society can long remain prosperous without the rule of law and respect for human rights.’

Over the next few years, during dinners in London and Geneva, we focused on this task of nation building – developing, with Carlos Lopes, an idea for an institute that would provide a vital artery of nation-building best practice and expertise and offer new ideas and best practice principles for some of the continent’s weakest economies. It’s an idea that we have yet to realise, and one that would, at this time of great need and great opportunity, accelerate the sustainable change Kofi worked to create in the world.

In the work of his Foundation, and the leadership of Alan, Kofi’s legacy will live on; may we all learn his lessons to play our part in sustaining it.