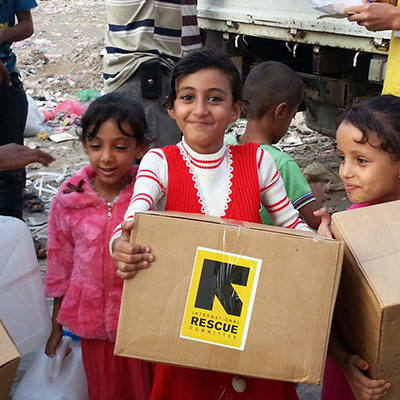 In the brief moments when it has been possible this week for the British press to consider anything other than ballots and political psychodrama, some might have noticed David Miliband, turning our sights to much bigger problems than Brexit.

There are now 70.8m forcibly displaced people worldwide. Half of them are children. Less than 1% are resettled in western nations. In his capacity as CEO of the International Rescue Committee, Mr Miliband argues we have now entered the Age of Impunity: ‘a time when governments and non-state actors can commit crimes, including war crimes, and get away with it. Use chemical weapons and kill their own people. Shell a coach-load of children and avoid an independent investigation. Commit ethnic cleansing and avoid justice. Besiege communities, break international humanitarian law, and escape accountability.’

The causes of impunity are complex and many, but we see their effects daily. Intra-state conflicts rage three times longer than they did a century ago and life chances for civilians in a war zone have declined in the last decade. On one side of the scales we have the ’new arrogance of power’ expressed by the world’s growing autocracies; on the other, the steady decay of our multilateral institutions – neither equipped nor prepared to meet either inter or (increasingly) intra-state conflict, and liberal western democracies, by turns consumed by in-fighting, increasingly isolationist, or too embroiled in lucrative arms dealsto kick up much fuss. Delivering the Fulbright Lecture this week, Mr Miliband noted that the USA now ranks near Saudi Arabia and Russia as a nation perceived to use its global influence for ill.

In a world of meaningless rhetoric, Miliband brings clarity, insight and moral courage. In various speeches this year, he has called for reformto the broken system of aid. In April he gave a damning assessment of the UN’s current failings: short-termism; failing to tackle gender-based violence; silence in the face of clear governmental abuses. ‘Where we say that we aim to be the voice of the voiceless, we are too often constrained in what we are willing to say.’

These are big, systemic, cultural failings. But they are not immune to pragmatism. Miliband’s call is this: ‘let’s fix what’s within our control, or we will be consumed by that which is beyond our control.’ Miliband’s practical fixes include establishing accountability metrics (targets for outcomes – not inputs or outputs, ‘children reached’ or similar obfuscations) – and reminds us that even SDG targets offer no clear lens on the situation, failing as they do to include displaced populations or crisis-affected communities.

In the world of business, there is much that remains in our control. Sweeping change can be enacted without multilateral agreement. Leaders can decide to value differently, measure differently, play a different role in the world. These are things we canfix. So let’s fix them.