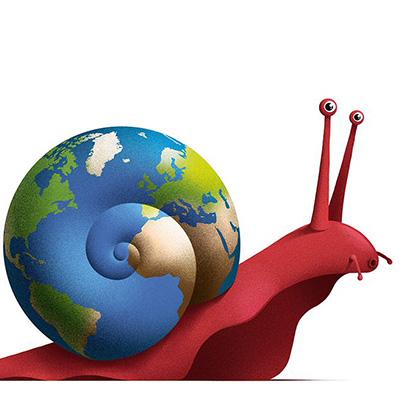 As ever, The Economist said it first. Recent trends confirm that we are now in the era of ‘slowbalisation’. The hyper-growth of globalisation, which has fundamentally transformed global economies, national identity, ways of life and individual prosperity – for tremendous good and tremendous ill – has run out of steam. For those paying attention, this should come as no surprise. The reasons are varied and many, as The Economist explains. ‘The cost of moving goods has stopped falling. Multinational firms have found that global sprawl burns money and that local rivals often eat them alive. Activity is shifting towards services, which are harder to sell across borders: scissors can be exported in 20ft-containers, hair stylists cannot. And Chinese manufacturing has become more self-reliant, so needs to import fewer parts’.

But the impact, at its core, is this: ‘rules of commerce are being rewritten around the world. The principle that investors and firms should be treated equally regardless of their nationality is being ditched.’ There are increasingly few level playing fields. From the complexity of regionalised data and privacy laws to newly patriotic tax systems, to stringent new vetting for foreign investment – the world is becoming regionalised and territorial once again.

This is far more fundamental than the political pageantry of trade wars between deeply co-dependent nations (though these are symbolic of a different challenge). Local is good, we’ve learned to once again appreciate in the anti-global backlash of recent years. But a regionalised world is a world without shared interests. This is bad news for Brexit Britain, whose vision of uncomplicated global trade deals pales by the day. It’s bad news for emerging economies, whose hopes of closing the gap through trade will shrink. It’s bad news for humanity overall. Humanitarian appeals to the better angels of western democracies, history teaches, come swifter when economic or security interests are also at stake. A revival of isolationism at the precise moment more global crises confront us than ever (climate change, migration and the automation revolution to name a few) is calamity.

For the growing number of “strong men” authoritarian rulers both riding and cultivating these waves of global volatility, slowbalisation is a great boon. As Martin Wolf observes in his powerful FT editorial this month, the new authoritarianism busy consuming global democracies from the inside out – ‘like wasp larvae eating a spider’ –  is less about propaganda or brute suppression than its 20th century predecessor. Instead, they are powered by one thing: their magnificent propensity to spread doubt. ‘Cynical politicians, able to lie as easily as they breathe, make progress in populations already cynical about those in charge. Their supporters may or may not believe that the new leader has the answers. But they have become convinced that the old ones do not.’

A closed and unstable world full of prolonged uncertainty is our new normal. Both factors spell disaster for business, which will feel the most immediate and – if it cannot adapt – sustained impact. VUCA is the new vernacular of our global reality, frequently used to evoke a world in which nothing can be known, planned, or done. But for the military, which originated this acronym to plan for the volatile, uncertain, complex and ambiguous scenarios battle inevitably brings, each component can be addressed with specific tactics – as this excellent HBR article demonstrates. Keep calm, think smart, and carry on.