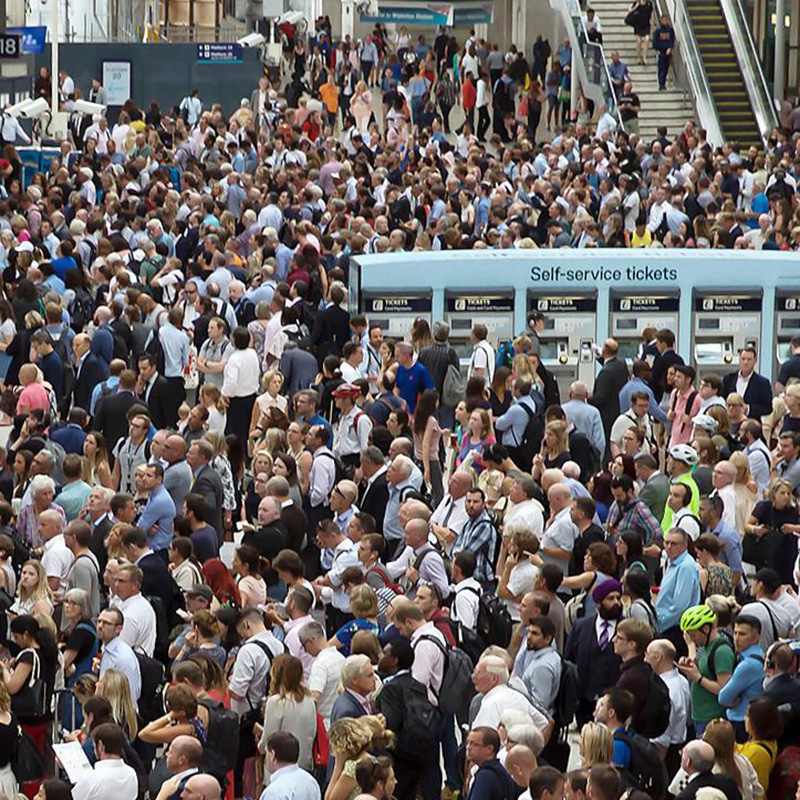 “Telecommunications,” Macrae wrote, “will alter society’s patterns more profoundly than the previous and smaller transport revolutions of the railway and automobile have done.” A digital America, he declared, would soon “lead the world toward the end of the urban age.”

When it comes to overcrowding, Londoners have little to complain about. Day to day, we share each square kilometre with around 5,285 other people. In Kwun Tong, Hong Kong’s densest district, that figure leaps to 56,000 – captured in 2014 by Michael Wolf’s haunting, bar-code-like images of infinite high-rise apartment blocks.

Today, there are 28 of these megacities, each housing over 10 million inhabitants – a figure which is projected to rise to 41 by 2030. Tokyo leads with over 38 millions inhabitants, followed by Delhi, Shanghai and Mexico City. 90% of the world’s rural population live in India and China; if their development continues on their current trajectory, the 54% of humanity who currently dwell in cities could dramatically increase, doubling our urban consumption of energy, according to UN predictions.

As a fascinating article explores this month, urbanisation is not losing its powerful draw, despite the prediction of many of the world’s foremost experts. This includes modern oracle Norman Macrae who, alongside accurately predicting the collapse of the Soviet Union, the rise of Japan, the fallout of advanced healthcare, and the dawn (and exact trajectory) of personal computing when these ideas were still inconceivable, foretold the end of cities as we abandoned the daily commute for a technologically-connected rural idyll.

There are many good reasons to hope for this ‘re-ruralisation’: commuting is bad for our health, our wallet, our time and the environment. Cities are rammed, infrastructure is unsustainable, gentrification is entrenching inequality. A visionary – and necessary – future, some argue, involves a return to communities which provide sustainable care and living structures, with all the remote working possibilities of the digital age.

Yet trends are going backwards. Cities have become safer, cleaner: abundances of  aspiration, culture and consumerism. Many of the world’s biggest technology companies – among them IBM and Aetna – have recently banned remote working on the grounds of productivity; rather a blow, it could be said, to the products they’re pushing.

Unsurprisingly, perhaps, for many knowledge workers in today’s highly collaborative industries, the ability to produce good work depends on ‘social presence’ – the state of mind in which we experience people as physically present, whether they’re an avatar or not. Whether that’s for panopticon-like oversight, simple efficiency, or basic human need, it’s hard to say. Work is underway to create avatars that sufficiently crack the whip or hold the hand. But when it comes to the virtual office and our rural future, we’ll have to hold out a little longer.